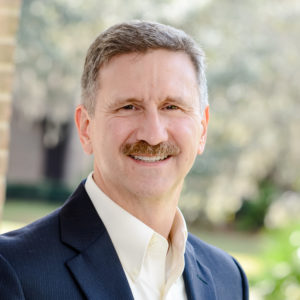 Originally from Nebraska, Dr. Hill studied art at the University of Nebraska, after which he worked for a few years as a commercial artist. After graduating from Westminster Seminary in California, he pursued further studies, earning a Ph.D. in New Testament at Cambridge University. His dissertation in early Christianity was subsequently published as Regnum Caelorem: Patterns of Millennial Thought in Early Christianity. After teaching at Northwestern College in Orange City, Iowa, for five years, he joined the faculty at RTS in 1994, moving to Orlando with his wife Marcy and their three children.

Dr. Hill has established an international reputation in the fields of New Testament and early Christian studies through scores of articles, essays, and other works. His books include The Johannine Corpus in the Early Church (2004), Who Chose the Gospels? Probing the Great “Gospel Conspiracy” (2010), and the forthcoming The First Chapters: Dividing the Text of Scripture in Codex Vaticanus and Its Predecessors, all from Oxford University Press. Dr. Hill also collaborated on several other books, including editing with Frank James a Festschrift for Roger Nicole, The Glory of the Atonement: Biblical, Historical, and Practical Perspectives (InterVarsity Press, 2004).

In his retirement, Dr. Hill plans to continue his research and writing and hopes to teach occasionally at RTS Orlando and other campuses. He and Marcy are eager to travel throughout the U.S. to visit their children and grandchildren.

Dr. Ligon Duncan, Chancellor and CEO, remarked, “It has been a true blessing to be Chuck’s colleague over the years. I’ve learned from him, read his work, and benefited from our conversations and friendship. Chuck’s work in the area of Christianity, New Testament studies, and canon, combined with his love for the Lord and the church, model the type of scholarship we want to do at RTS.”

RTS Orlando President Scott Swain said, “Dr. Hill has shaped the RTS Orlando community in a number of enduring ways. His rigorous and reverent exposition of the Bible in the classroom set a stellar example for our students’ own ministry of the Word, while his service on several faculty search committees ensured that professors of his academic caliber and piety would continue to bless RTS Orlando students for years to come.”

At his retirement celebration, Drs. Greg Lanier and Nicholas Reid surprised Dr. Hill with a Festschrift in his honor. A Festschrift is a traditional way in which scholars recognize the contributions of a peer by collecting essays that focus on themes of that scholar’s writings. Studies on the Intersection of Text, Paratext, and Reception: A Festschrift in Honor of Charles E. Hill assembles 13 essays that show the need to work across a variety of particular fields in New Testament Scholarship.

Jonathan Duckett remembers being struck by Dr. Hill’s kindness and humor from their first lunch together. “I remember sitting in Greek Exegesis and stifling my laughter from the unexpected jokes he would make during his lectures. But even more than his humor, I’ve known Dr. Hill to show deep care for his pupils, always generously giving his utmost attention to any student who asked for some of his time. I can only hope that this pastoral spirit has rubbed off on me. His teaching and influence will be greatly missed at RTS, but I’m thankful that it will continue on in my pastoral ministry and in the ministries of the many who have had the privilege to study under him.”

Eunike Indrawan served as Dr. Hill’s teaching assistant. She shares, “Dr. Hill’s love for Christ and the church always shines forth both inside and outside the classroom. In the beginning of each class, Dr. Hill always asked how everyone was doing and prayed for us. He continued to pray for us through a recorded video when the pandemic hit and forced us to learn remotely from home. Dr. Hill’s parting words in Greek Exegesis class continue to encourage me in my study of the original languages: ‘The church needs pastors and teachers who know and use their Greek New Testament… Whether you particularly like Greek or not, whether you are particularly good at it or not, there are people out there who want to lead your flock astray with bogus arguments from the Greek. The better you know your Greek, the better off you’ll be.’”