I’m being asked the question, “How do I make the most of my devotional life?” It’s one of these questions a bit like prayer. Robert Murray McShane said, as did others, that if you want to humble a person, ask them about their prayer life.

It’s important not to devolve into a works-based argument that says, “I’m saved by the quality of my devotional life.”

It’s very important not to devolve into a sort of works-based argument that says, “I’m saved by the quality of my devotional life.” Obviously, it’s good to have a routine. I think God has made us and placed us in a life that’s filled with routine. We have day and night, weeks, months, and years. We’re creatures of time, and we’re creatures of habit.

Be forgiving of your devotional life. Don’t try to do something that you can’t fulfill.

Some days, though, are busy. Some days you wake up and you can hardly think in the first hour because maybe you haven’t slept properly. All kinds of things happen, so be forgiving about your devotional life. Also, don’t try to do something that you can’t fulfill because that will only be a recipe for guilt and there’s enough guilt in the world without making guilt for ourselves.

As you grow in the Christian life you can you can expand on that and expand within the level that doesn’t have you living by guilt every day because that’s not a good thing. There’s gospel for our devotional life, and growing in that, I think, is important. 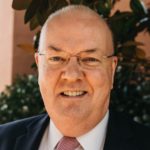