Many of us in the church will, at some point, confess on a Sunday morning, the Apostles’ Creed. And one of the lines in the Apostles’ Creed is “he descended into hell.” What do we mean when we say he descended into hell? Well, many have understood those words to mean that Jesus Christ, between his death and his resurrection, went locally and physically into hell, into the underworld, in his soul, and that he went for certain purposes. Some say he went to proclaim his victory over the condemned souls in hell. Others say he went to liberate Old Testament saints from their limbo. And others say that he went to offer those residents of hell a second chance at salvation.

What It Doesn’t Mean

The problem with all of those explanations, as well as the idea of a local and physical descent into hell, is that there is no teaching of Scripture that would support it. For one thing, remember what Jesus said to the thief on the cross: “This day, you will be with me in paradise.” That tells us that when Jesus died, his human soul separated from his human body for a time. Jesus Christ, having tasted death, has conquered death in victory in the resurrection, not for himself only, but for all of his people.His body was laid in the grave, and his soul went immediately into paradise. And he promised the thief, “You will be with me this day in paradise.” Further, we know that Old Testament saints, when they died, went to be with God in heaven. We get a window into this in Jesus’ parable of Lazarus and the rich man. Lazarus dies and he goes into the bosom of Abraham. That is a picture of Old Testament saints who were not held in limbo, but went immediately into the presence of their redeemer, God. Further, we know that there is no second chance or opportunity for salvation offered to human beings after death. Hebrews tells us, after death there is judgment, and we’re told that when we stand before God in judgment, we will be assessed on the basis of the deeds done in this life, not anything that we may or may not do after death.

So that clears the ground, but what exactly are we saying when we confess, “he descended into hell”? Well, the larger catechism, the Westminster Larger Catechism, helps us by saying, when we confess he descended into hell, what we mean is that Jesus Christ was buried and continued in the state of the dead until the third day. It’s a way of reminding us that Jesus, as second Adam, as a human being, truly did die and lay in the bands of death until he burst them at the resurrection. And that points us to our great hope that Jesus Christ, having tasted death, has conquered death in victory in the resurrection, not for himself only, but for all of his people. And as we look to the grave, unless Christ returns first, we know that that grave has been conquered by Jesus Christ for us, and we have resurrection hope that not even death can take away from us. 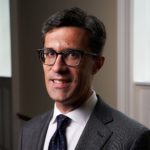 Dr. Guy Waters (Ph.D., Duke University) is the James M. Baird, Jr. Professor of New Testament and Academic Dean at RTS Jackson. In 2003, he became a teaching elder in the Mississippi Valley Presbytery (PCA). He served as the Chair of the Credentials Committee for more than ten years.