The intent of what Christ did at the cross was to die specifically for his people; for the elect.

As Presbyterians, we believe that Christ died for a particular people. He died for the elects; whom God sees through space and time as his church. Acts 20:28 speaks in terms of God dying for the church; giving himself for his church. The intent of what Christ did at the cross was to die specifically for his people, for the elect. Another piece in the whole question is not simply a question of intention; it is also a question of whether Christ accomplishes something.

Part of the problem with unlimited or general atonement is that if you really believe that Jesus’ death accomplishes something, and you believe that it is intended for all people indiscriminately, then, logically, you should be led to universalism – that all men will in fact be saved. That is a more consistent position than the position that many evangelicals hold which is that Christ died for all men indiscriminately, but his death does not actually accomplish their salvation. That is a position that dishonors Christ’s death because it holds that Jesus’ death does not actually secure salvation.

That is why it is a particular redemption or a definite atonement. That is why we believe that it is biblical. 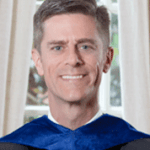