Financial broker Biff Bracy has served for nearly four decades on the RTS Board of Trustees. 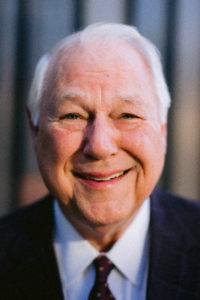 Biff Bracy was looking for rest for his soul. He had invested four years of his life pursuing his dream of becoming a major league baseball player, and that investment hadn’t paid off.

Upon encountering Jesus as Lord and Savior at age 28, though, Biff found a new trajectory in life that he could bank on. Eventually forging a career as an investment broker, the longtime RTS Board of Trustees member has lived a life that has reaped both financial and eternal dividends.

At the age of 76, Benjamin Franklin Bracy has settled near Charlotte, North Carolina for 35 years, following years of moving around the country. One of six children, Biff was born near St. Louis and grew up in Pennsylvania, New Jersey, and Missouri before landing in Orangeburg, South Carolina at age 15.

“My father was a troubleshooter—he went to [businesses] where they had trouble, and he cleaned them up or shut them down,” Biff explains. “He was a very tough businessman— he had the ability to cut through all the smoke and get to the issues.”

Biff didn’t realize it at the time, but his father was also laying the foundation for his eventual salvation. “I had a wonderful father who was a believer, a ruling elder,” he recalls. “But typical of his generation, faith was a very private thing, defined more by how you lived than what you said. We were in church every weekend, and my father was a wonderful man of prayer, but we never discussed having a personal relationship with Christ.”

I made myself a promise that I’d either be in the big leagues at 25 or I would quit. And I wasn’t, so I did quit.A high school football and baseball standout, Biff earned a football scholarship to Duke University, where he continued to excel in both sports. On the diamond, he led the Atlantic Coast Conference in batting average his sophomore year, and on the gridiron, the running back was eventually drafted in 1965 by the Washington Redskins of the NFL and the Denver Broncos of the AFL (which later merged with the NFL).

Baseball won out, though, and upon graduation from Duke, Biff signed a contract with the St. Louis Cardinals. By this time having married Nan, his high school sweetheart, Biff set out on his odyssey to make the major leagues. They bounced around minor-league outposts like Cedar Rapids, Iowa, and Little Rock, Arkansas. At one point Biff was at the Triple-A level, one rung below the big leagues.

“But when I started,” he confesses, “I made myself a promise that I’d either be in the big leagues at 25 or I would quit. And I wasn’t, so I did quit.”

Faced with, as he describes it, “putting my trousers on every day like everybody else,” Biff faced a spiritual crisis. “When I quit playing ball,” he continues, “it was an emotional thing for me because I always believed that I would end up in the major leagues. It was also difficult dealing with the fact that I had not achieved what I set out to achieve and assumed was a predetermined thing in my life.”

Through the encouragement of Nan, who was a believer, Biff attended a Christian weekend retreat, where a dentist from Atlanta presented the gospel message to him. “In Matthew 11:38, Jesus says, ‘Come unto me, all you who are heavy laden, and I’ll give you rest.’” Biff says. “I didn’t come to the Lord as a result of a conviction of sin, though that did come eventually. I came to the Lord because I wanted rest from the burden I was feeling in this transition in my life.” 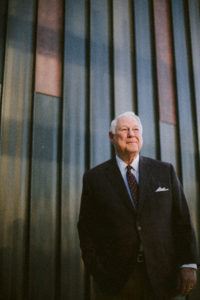 Biff’s transition was not only spiritual, but also professional and geographical. After his baseball career ended, Biff worked for a hospital supply company, then pursued a job opportunity he describes as “one that nobody had made anything out of, and I figured, ‘Well, I’ll go there, and if I make something out of it, I’m a hero, and if I don’t, I’m no worse than anybody else.’”

“There” was Jackson, Mississippi, where two things happened in Biff’s life. For one, he found a professional niche as an investment broker. Also, upon joining First Presbyterian Church in Jackson, Biff met Bob Cannada, one of the founders of RTS. While in Jackson, Biff was invited to join the RTS Board of Trustees and became active in ministry, including teaching Sunday school at First Presbyterian.

Even though they “were very happy in Jackson,” another transition developed. When circumstances prompted Biff to leave the firm he was with, Nan, a native South Carolinian, said to her husband, “If you’re going to do that, then I want to go home.” Biff replied, “What’s home? I’ve never been anywhere long enough to call someplace home.”

As Biff continues the story, “She said, ‘All I know is that when I’m east of Atlanta, I’m home, and when I’m west of Atlanta it’s never going to be home.’ So we came back this way and that’s how we ended up back in the Carolinas. Your wife can be very wise—it was a great move for us.”

We’re putting pastors in pulpits, and as we do that, we are having a geometric effect for the gospel, as opposed to trying to convert one at a time.

The Bracys’ move to Charlotte in 1984 also proved to be great for RTS, as Biff played an active role in bringing the seminary to the Queen City with the establishment of RTS Charlotte. His work as an investment broker continued in Charlotte as well, and he recently retired from the financial services industry after nearly five decades in the business. From his perspective as an investment broker,

Biff sees his nearly 40 years on the RTS Board of Trustees as “the most strategic investment you can make in the kingdom of God. It’s like the old adage: You can feed a man a fish and he’s satisfied for a day, or you can teach him how to fish and he’s satisfied forever. That’s the same way I look at the investment we’ve made here in Charlotte and throughout RTS. We’re putting pastors in pulpits, and as we do that, we are having a geometric effect for the gospel, as opposed to trying to convert one at a time.

“There are a lot of great ways you can invest your money, but I don’t think there’s any better than RTS. Because I’ve been a part of it, I know what good stewards we have been of that money, and I have seen how God has blessed that. If you look at it from a return on investment, it’s an incredible multiplier. When you look at how the ministry of RTS has spread literally throughout the world for the gospel of Christ, there’s nothing I could put my money to that has had a greater reward than investing in RTS.”

From Biff ’s vantage point of nearly half a century as a believer, he sees a critical need for the development of leaders for the church. “The only hope this nation or this world has is the church of the Lord Jesus Christ,” he declares. “I know God is sovereign and I know how it will all end—every knee will bow and every tongue confess Christ Jesus is Lord. But in the interim, it is a cultural and spiritual struggle, and we need strong, Bible-believing churches filled with pastors who preach the whole counsel of God, who believe that the Bible is the Word of God, not just containing the Word.”