A Christian can lose their salvation because the New Testament speaks of Christians phenomenologically according to the phenomenon that it encounters. Paul writes to the Corinthians and he assumes that they are believers. Paul doesn’t know whether they’re all believers. He doesn’t know whether they’re all elect. It is more than possible to make a profession of faith, to be a member of the church, to be an officer in the church, to be a minister of the Gospel, to be a disciple of Jesus, and actually not be elect; not actually be a Christian at all.

It is possible to make a profession of faith, to be a member of the church, and not actually be a Christian at all.

You have the phenomenon of Judas. You have the phenomenon of Demus. “Has forsaken me having loved this present world.” You have Hymeneus and Philetus, who destroy the faith of some. You have warning passages in the Bible. You have conditional clauses where there is an “if” in the clause. All of these presuppose the possibility that you may think that you are a Christian and others may think that you’re a Christian, but actually you are not, and you fall away and you commit apostasy. Apostasy is a real phenomenon in the New Testament. We have to be wary of it. We have to be fearful of it. The doctrine of perseverance takes that into consideration.

Now, I suspect what the question was asking was, “Can a true Christian fall from grace?” The answer is no. John 10:29, “None shall pluck them from my father’s hand.” Romans 8:28-30, “Whom he did foreknow, he also did predestine to be conformed to the image of his son and whom we did predestined then he also called and whom he called he justified and whom we justified he glorified.” There’s a track from calling to justification all the way to glorification. So, can a true Christian fall from grace? Praise God, no. 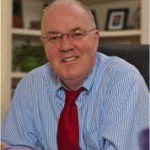