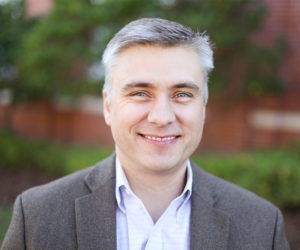 Dr. Strain has served as the Senior Minister of the historic First Presbyterian Church in Jackson, Miss. since 2014. Born in Glasgow, Scotland, he was ordained to ministry in the Free Church of Scotland in 2003 and has held pastoral charges in London, England, and Columbus, Miss.

“We are thrilled at the opportunity to host Dr. David Strain on campus for our 2022 Hughes Lectures,” said Dr. Scott Swain, RTS Orlando President. “Dr. Strain is a model of expository excellence, biblical conviction, and wise judgment. I know that our entire seminary community will be blessed by his presence.”

As Senior Minister at First Presbyterian, Dr. Strain also serves as the convener of the Twin Lakes Fellowship, a fraternal organization devoted to the encouragement of gospel ministry and ministers. He holds degrees from Duncan Jordanstone College of Art, Trinity College Glasgow, the Free Church of Scotland College in Edinburgh, and Reformed Theological Seminary (DMin ’16). He is married to Sheena and they have two sons.

Dr. Strain’s lecture series is entitled “The Priorities of Preaching.” The public is invited to attend the lectures, which will take place November 8-9, and to join Dr. Strain for a question-and-answer luncheon.

About the Hughes Preaching Lectures

The Hughes Preaching Lecture Series is an annual forum at RTS Orlando for a prominent pastor or scholar to give a series of lectures which directly or indirectly address the subject of preaching in order to resource faithful and effective Christian preaching.