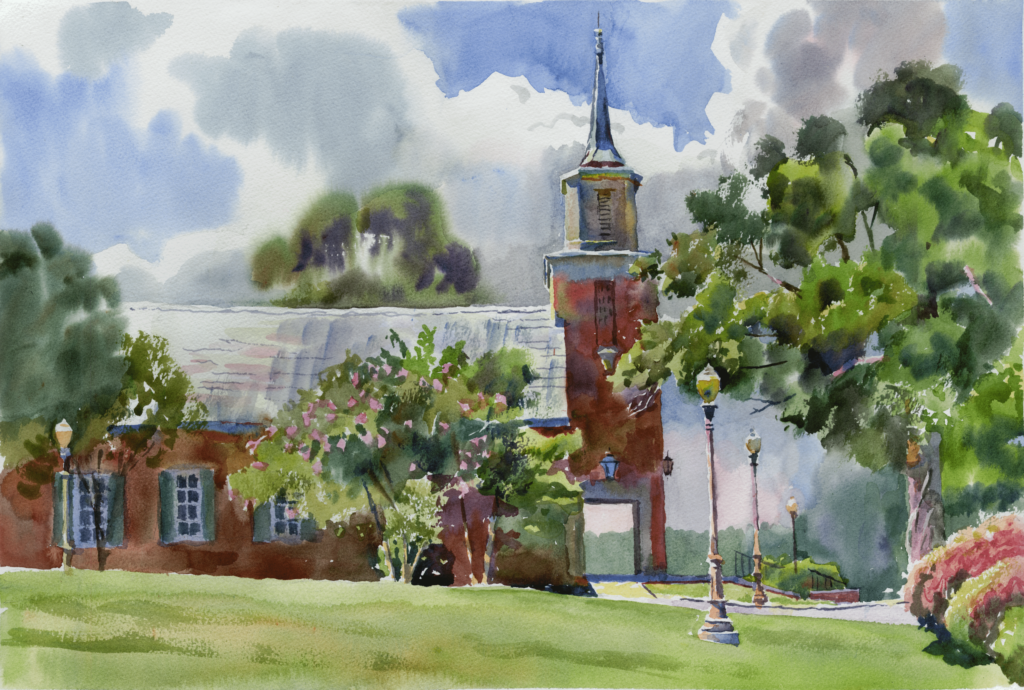 The seminary commissioned these original watercolors of the historic RTS white house, Grace Chapel, and chapel pulpit as a tribute to the campus anticipating its relocation in 2023.

The project was originally proposed by the Rev. Perry McCall, Regional Development Officer for the Jackson campus. McCall’s idea to contract Waters for the original artworks is now a colorful reality.

“A major focus of ours is that we celebrate and honor the legacy of God’s grace to RTS on this campus,” said McCall. “The idea was sparked while admiring another one of Wyatt’s works commissioned by the University of Mississippi Medical Center.”

Waters, a prolific painter, resides in Clinton, Miss., where he earned his bachelor’s and master’s degrees in art at Mississippi College. He is the recipient of numerous honors and awards, including the Governor’s Award for Excellence in the Arts, and has produced multiple books, including his recently released “The Watercolor Road: Painting and Writing Through the American South.”

Well-known throughout the Jackson area, the artist works solely on location, preferring the challenges that plein air and watercolor present. He made several distinct trips to RTS, braving the summer heat to paint some of the campus’s historic structures. 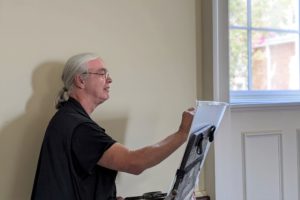 Waters spoke on his own interactions with the seminary over the years: “I used to come here to the bookstore because they had some great books. I remember I bought a really expensive Bible, a big Zondervan. It was just the best. And I still have that.

“That’s my personal connection with RTS— that Bible. But RTS has always been a presence here. While in high school, I had a lot of friends in West Jackson, and this was part of the trip I made— passing by the seminary.”

This body of work was commissioned following the announcement of RTS’s decision to relocate the Jackson campus after 55 years at its original property.

“Well, of course, I was sorry to hear it’s moving,” said Waters. “However, I also know the nature of life is to change, and you just can’t ever tell where change is going to take you. I’ve had changes in my life, and every one of them— if I thought about it— I would say they were all good things even though they were not things I embraced at the time.”

As an opportunity for friends of the seminary to celebrate their own memories of the campus, RTS will be selling copies of the prints, along with notecards and mugs, at the Mind + Heart online store as the RTS Jackson Heritage Collection. The items are now available for preorder at mindandheart.com/heritage.

“Wyatt is world-renowned for his gift of capturing the beauty and emotion of a place,” said McCall. “What better way to honor this hidden Mississippi treasure than to memorialize it in fine art?”