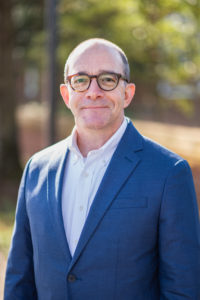 Habig is the pastor of Downtown Presbyterian Church in Greenville, S.C., where he has served for 17 years. He grew up in Jackson and was converted through the ministry of First Presbyterian Church. For 10 years, he was a campus minister with Reformed University Fellowship at Mississippi State University— his alma mater— and Vanderbilt University.

Habig also serves on the board of trustees of Covenant Theological Seminary, where he earned an MDiv degree. He and his wife Dana have three children.

Dr. Charles M. Wingard, Professor of Pastoral Theology and Dean of Students at RTS Jackson, commended Habig: “We’re delighted that Brian will deliver this year’s John Reed Miller preaching lectures. 17 years ago, he planted a congregation in Greenville, South Carolina that has contributed to the revitalization of that city’s downtown. His pulpit ministry has been influential in shaping the lives of new and mature believers. These lectures will help both seminarians and veteran pastors sharpen their tools of ministry.”

Dr. Ligon Duncan, RTS Chancellor and Jackson campus President, said, “I am very much anticipating having Brian Habig give the John Reed Miller Lectures at RTS Jackson this fall. Brian is a dear friend and my daughter’s pastor! He is a gifted preacher and has had a profound impact on the faith and lives of thousands of students and congregants through his Reformed University Fellowship campus ministry at Mississippi State and Vanderbilt, and his pastorate at Downtown Presbyterian Church in my hometown of Greenville.”

Habig will lecture on the topic of “The Self-Aware Preacher.”

On a personal note, Dr. Duncan added, “Brian is affable, funny, humble, and brilliant. I’ve already read some pages of the drafts of his lectures, so I am even more anxious to hear them, and thrilled that our students will be able to benefit from them. Brian knew Dr. Miller, knows and loves Jackson, Mississippi, is invested in theological education himself, and is a veteran minister of the Word. He is the perfect person to deliver what may well be the final John Reed Miller Lecture series ever given in historic Grace Chapel on the original campus of RTS. You will not want to miss this.”

Along with Sam Patterson, Dr. Miller was one of the five pastors who met to pray about the founding of the seminary. He was particularly invested in RTS students in his later years, deliberately building a weekly schedule of meetings with seminarians, often over a meal, in which he would encourage, mentor, recount important church history, and offer his wisdom in the realms of theology and ministry. He also would challenge students to read John Owen’s seven-volume commentary on Hebrews, and would offer to buy it for them and give it to them free if they would agree to read it all.

The establishment of the RTS John Reed Miller Lectures through First Presbyterian Church’s generous funding has been a means of stimulating the same robust biblical preaching and pastoral ministry that characterized Dr. Miller’s own life.

Past speakers for the lectures have included H.B. Charles, Jr., Rico Tice, Joel Beeke, Ralph Davis, Mark Dever, Mark Johnson, Julius Kim, Sinclair Ferguson, Tim Keller, and Kevin DeYoung, as well as an array of other esteemed speakers. Recordings of the prior lectures are available on the RTS website.

This year’s lectures series will take place on October 11-13. To register for the event, click here.