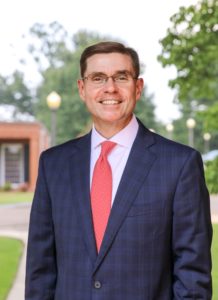 Reformed Theological Seminary is pleased to announce that Douglas Baker has been appointed as Chancellor’s Chief of Staff, effective August 5, 2021.

At RTS, Baker will assist Dr. J. Ligon Duncan III in his duties as chancellor and serve as a liaison between the Chancellor’s Office, the RTS Board of Trustees, and administration. He will assist with increasing efficiency and responsiveness into existing operations, help to define new operational strategies, and assist the chancellor and senior leadership on special projects.

Chancellor and CEO Ligon Duncan shared, “I sincerely look forward to many years of service with Doug here at Reformed Theological Seminary. May the Lord prosper the work of our hands, and bless, protect, provide for and grow his seminary.”

“Historically, institutions created by and for the church often turn against their founding doctrines in ways that actually create a cycle of downgrade across generations. Aware of this fact, the faculty and staff of RTS know their service is a sacred stewardship entrusted to them by faithful believers to advance the work of Christ in this world,” Baker stated. “It is an honor and great privilege to join with them and serve among such dedicated servants of the church. I look forward to all that is before us as we, together, hold forth the light of the gospel.”

Douglas E. Baker (Doug) has served on the executive staff of five governors across two decades as well as consultation with the White House and other federal cabinet agencies. As special assistant to former Arkansas Governor Mike Huckabee, he assisted the governor in his communications office and led efforts for Gov. Huckabee’s notable economic development initiative – From Fiber Optics to Fly-fishing. Baker later served under Dr. David Dockery in the Office of the President and Provost of Union University, and as a key leader in the corporate relations division of the United States Naval Academy Foundation. He has also recently assisted Dr. Dockery in his work with the International Alliance for Christian Education (IACE).

Returning to his home state of Louisiana during the second term of Gov. Bobby Jindal, Baker led policy and communications work for tax reform, technology advancements for budgeting across eleven state agencies, and helped to advance a government efficiency project for Gov. Jindal resulting in more than $2 billion in savings over five years. His work at the US Leadership Foundation focuses on education reform and advancement for poor and at-risk students in urban and rural communities across the nation. He also served on the staff of the historic Tenth Presbyterian Church in Philadelphia, Pennsylvania as executive administrator.