The Bible tells the story of a world at the start of history where a loving God created a people for himself and a place for that people. In that place where they lived, relationships were whole and humans related to creation around them, woman and man to each other, and woman and man to God. Everything was shalom. It was a peaceful place: harmony, order, no power struggles, and therefore no injustice in that place. It wasn’t perfect, but it was good. There are two dimensions in view here: temporal shalom, peace between people and nature, and cosmic shalom, or a right relationship and communion with God who made us.

When we pursue justice for righteousness’s sake, we proclaim the kingdom of God on earth.Then we get to the fall in the story, and that shalom is absolutely shattered but not completely destroyed by us in our rebellion. In the cosmic realm, we committed treason against God, not injustice, but treason, because we don’t have power over God, but rather our sinful rebellion against our loving creator who has ultimate sovereignty over us can be seen as a kind of cosmic, ultimate treason against the one who created us. Also in that moment of cosmic treason, injustice enters the world into the temporal realm. Now we have a world that was not supposed to know injustice and a people who were not made to know injustices, who weren’t created to be oppressed or to be oppressors. We shattered our shalom. We put ourselves in an unnatural position in relation to everything around us. Just as humankind wasn’t created to be separated from each other in the temporal realm, we weren’t created to be separated from God.

Our cosmic treason could only be satisfied by Christ’s sacrifice on the cross and all his triumph over all forms of satanic destruction, including injustice. At the end of God’s story, all things won’t be merely restored to that pre-sin dwelling place. They will actually be made perfect in a future dwelling place where God’s justice and his mercy will be dispensed on all creation and in perfect measure. No more sin, no more pain, no more injustice, no more weeping. What a day that’s going to be in the kingdom of God. The old people used to call it “the sweet by and by.” But what does that say about “the nasty now and now,” right here in the temporal realm? When we pursue justice for righteousness’s sake, we proclaim the kingdom of God on earth, his intentions for the world as he created it to be. Making wrongs right, holding the unjust accountable, seeing to it that the wronged are made whole, whether it’s through state courts or church courts or even in our personal relationships, we have many avenues to proclaim God’s kingdom as he wants it to be.

When we do pursue biblical justice, we proclaim to a watching world that there’s a better day coming.The Bible tells us that we are the kingdom of God on earth, that Christ has provided justice and mercy for our sins in all dimensions, for the injustices we’ve committed against others, and for those injustices committed against us. It proclaims to those of us who’ve been abused and oppressed, “You weren’t created to be dehumanized.” It says to us who’ve been abusers, whether it’s an individual dehumanizing people or a dehumanizing cultural practice, “You weren’t made to abusively lord power over other people. Come up to a higher place.” Executing biblical justice tells the watching world that God has always intended for us a peaceful ordered existence with a plan for human beings that’s good and right and life-giving. That’s shalom. 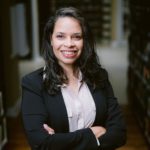