Unless you have been living by yourself on a deserted island in the South Pacific, you no doubt know what it is like to experience a broken relationship. And you also no doubt know the tension that exists within that relationship. It is a palpable tension or awkwardness that persists until and unless reconciliation is secured and the offending party has been restored.

That is one reason why I find the context leading up to John 21 so intriguing. Jesus has appeared to His disciples twice since His resurrection. He has already dealt with the unbelief of Thomas, but He has yet to do anything about Peter’s threefold denial. Twice Jesus and Peter are together in the same room, and twice Jesus says and does nothing about Peter’s failure. The silence is deafening. Peter was the proverbial “elephant in the room” for both these meetings, and Jesus apparently does nothing to secure reconciliation and restore the offending party.

At some point after these two meetings, Peter decides to go fishing. We don’t know for sure why — it’s possible that he was simply looking to pass the time until Pentecost and could find no better way to do so. But I think the context points in a different direction. John 21 is the first time that we see Peter fishing since he was originally called by Jesus to be a disciple. This fact, together with the context of the broken relationship between Jesus and Peter and the lack of reconciliation in Christ’s first two appearances, suggest that Peter may well have given up and was now returning to what he had been doing before Jesus called him. Most certainly, Peter’s failure was still front and center in his own mind and experience. Perhaps Jesus’ silence during those two meetings was more than Peter could handle.

I can imagine Peter’s thinking going something like this: “Why would Jesus choose to deal with Thomas and yet not deal with me? Thomas wasn’t even there for our first meeting with Jesus. And yet Jesus still dedicates the entire next meeting to dealing with Thomas’ doubts and addressing his needs. But I was there on both occasions, and Jesus said nothing to me.” For all these reasons, Peter’s decision to go fishing looks to me like he is giving up, allowing his failure to get the better of him.

Perhaps you might be where Peter was in John 21, ready to pack it in and quit. Maybe you feel this way because you have failed, maybe repeatedly or even publicly (as had Peter). And Satan has used the opportunity to come alongside you and kick you while you are down. Or maybe Jesus has been silent in your experience, seemingly giving His attention to others (the Thomases of the world, for instance) and passing you by. If you find yourself in any of these situations today, remember that you are not in uncharted waters. Peter was there long before anyone else, and that ought to encourage those enduring similar circumstances.

But let us do more than simply remember Peter’s example; let us focus on what Jesus is doing with Peter in John 21, because this is where the real encouragement can be found. Specifically, there are three things to be encouraged by: the preparation Jesus allows, the conviction Jesus brings, and the restoration Jesus offers.

As I indicated previously, I find it fascinating that John makes no mention of Jesus saying anything to Peter during their first two meetings. The silence really is deafening. Why would Jesus choose not to deal with Peter right away? Why would He wait until the third meeting with him, especially when He chooses to deal with Thomas at the very first opportunity that He can?

Admittedly, the text doesn’t answer these questions. But I think we can formulate a likely answer based upon what Scripture tells us about the nature and character of God. We know, for instance, that God is not cruel or mean- spirited, but rather perfectly loving, and that means that He always has our best interests in mind. As the late RTS professor Dr. Knox Chamblin used to say, God is always as drastic as necessary but as gentle as possible. He might “cause grief ” in the lives of His people; but He always does so with “compassion” in mind, because He is always doing what is best for us (Lamentations 3:31-33; Romans 8:28).

Thus it seems likely that Jesus waited until the third meeting to deal with Peter because the timing was not right until that occasion. Maybe the unbelief in Peter’s heart had not yet come to the surface, and so Peter was not yet ready to receive restoration. Whatever the case, we know that the silent treatment must have been what Peter needed most at the time. Otherwise Jesus would never have given it; He would have done something different. Jesus was clearly preparing Peter for what would follow.

When Jesus does finally deal with Peter, He does so in a way that brings Peter’s failure to mind. Notice the evident parallels between John 21 and the account of Peter’s denial in John 18:

In 21:4, we are told that Jesus deals with Peter “just as day was breaking” — to be sure, we do not know whether a rooster had yet crowed (see 18:27), but it was certainly around that exact time of day.

In 21:9, we are told that Jesus invites Peter and His disciples to gather around a “charcoal fire” (see 18:18 — these are the only two times the word occurs in the New Testament).

It should thus be obvious what is going on here in John 21. Jesus is recreating the scene of Peter’s failure in an attempt to bring conviction by causing Peter to come face to face with himself and his sin. And Peter seems to have gotten the point, because we read in verse 17 that Peter was “grieved” (“hurt” in the NIV) after the third time Jesus questioned him.

I am reminded of a passage from Augustine’s Confessions in which the north African bishop says, “but Thou, O Lord … didst turn me round towards myself, taking me from behind my back where I had placed me, unwilling to observe myself; and setting me before my face, that I might see how foul I was, how crooked and defiled, bespotted and ulcerous. And I beheld and stood aghast.” That seems to be what Jesus is doing to Peter in John 21 — setting Peter in front of his own eyes, showing him the ugliness of his sin, and allowing him to stand aghast at the sight.

Doesn’t Jesus do the same thing so often with you and me? When the time is right — never sooner or later — He comes at the very point of our failure and brings conviction of sin. To be sure, this is not a pleasant experience. As the NIV renders John 21:17, it “hurts.” We rightly stand aghast at what we see in ourselves. But without this painful step, there can be no true and lasting restoration.

John 21 is not the first time that Peter was told by Jesus to let down his nets after a long night of fishing and catching nothing. Luke 5:1-11 records the first (and only other) time that Jesus did this. On that occasion, Jesus calls Peter specifically by name and charges him to follow Him (5:10). In recreating the Luke 5 scene in John 21, Jesus seems to be reminding Peter of his calling. Peter had been called away from fishing to be a fisher of men. But now, as a result of his failure, Peter was returning to his former way of life for the first time since then. So Jesus recreates the scene to remind him that he has been called away from that way of life. Verse 19 would seem to confirm this, as Jesus once again charges Peter to “follow me!”

Therefore, John 21 appears to be a second calling, if you will — a starting over, a wiping the slate clean. Jesus seems to be telling Peter, “Yes, I know what you’ve done, Peter. I know that you have failed. Follow Me, Peter! We’ll start over at the beginning. I’ll wipe your failure away. I will put it as far from Me as the east is from the west. I’ll remember your sins no more.”

This is the restoration Peter had been waiting for. And what a restoration it is! Jesus waits until the time is right in Peter’s life, recreating the scenes of Peter’s failure and then his calling, in order to show Peter — not just tell him — that his sin has not changed his calling: “I know that you have sinned, Peter; follow Me!”

One of the reasons so many of us love to celebrate New Year’s Day is because it offers us a chance to start over with a clean slate — a do-over, if you will. This is precisely what the gospel offers every follower of Christ. It offers us a second chance and a third chance and a fourth chance, and so on. It says to each of us, “Yes, I know that you have sinned; follow Me!” 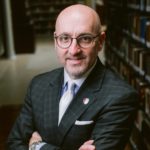