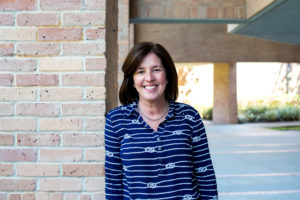 Leigh Swanson had a great idea that was born from great teaching. Now the Vice President of Community Relations at RTS Orlando, her path to that idea began as a young pastor’s wife in Tennessee. She sat under the teaching of Bettye Taylor, a spiritual mother in the church who provided an in-depth, expositional Bible study for the women. When Bettye’s health would not permit her to continue, Leigh asked if they could study the Scriptures together. For four years, they met weekly for study and discipleship. Leigh learned to study the Bible verse-by-verse – but she also learned a way of life.

The Swansons moved to Orlando in 2004 when her husband David accepted a call to First Presbyterian Church. Leigh was excited about the move, because she knew that RTS had a campus in Oviedo. The following fall, she began her studies at RTS and spent the next seven years taking several classes a semester until she finished her Master of Arts (Theological Studies) in 2012. She served as the Associate Dean of Students until 2017, when she transitioned to her current role as Vice President of Community Relations.

Our teachers convey more than just a subject; they also teach us how to live a life that honors the Lord, and if we are paying attention, they teach us how to teach others. Leigh saw her teacher live the hope of the Scriptures. Bettye had lost a child – and when she taught about suffering, perseverance and hope, she taught her students what that looked like in the life of the believer. This confirmed an important philosophy about Bible teaching: that it is most effective in the context of a relationship.

“I know there’s a time and place for DVDs and a virtual classroom, but it’s not as effective as a live teacher,” Leigh said. “In 2016, I read an article in Christianity Today, and the opening line was ‘The most influential women’s leader at your church may be someone who has never stepped inside its sanctuary.’”1 This article settled her idea that competent, trained, women’s Bible teachers connected to the local church were a critical need.

“When we (RTS Orlando) went through a leadership transition three years ago, our new president, Scott Swain, asked what we were doing to serve the community. We say we serve the community, but what could we do to serve in a way we haven’t before? And everything just lined up – I had just read that article that had been so eye opening.”

“The other piece of this story – that fall, prior to the leadership transition, I had been asked to speak at four different churches’ women’s retreats. I have always done retreats – and I do them because I love teaching. But, I was moving from part-time work to full-time work, I’m getting asked to do overnight retreats, and I just can’t do them anymore. The coordinators for the retreats asked, ‘Can you point us to someone else?’”

“All of these things were happening at the same time, so when Scott asked how we could serve the community, I knew immediately that we could equip women in Central Florida to teach the Bible. It’s what we do; we teach people how to rightly handle the Word of God. We have the resources to teach the Bible to them, and we also had the resources to equip them to teach. It wasn’t complicated. We set out to train women’s ministry leaders in our community to exegete and exposit. The groundwork is exegesis – first people have to be comfortable reading and understanding – and then they have to be comfortable teaching it.” 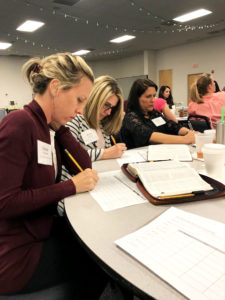 Swanson developed a scope and sequence for the program, Teaching Women to Teach (TWtT). Beginning in January 2018, students would meet once a month for a class. Over the summer, they would have library nights to learn theological research in lieu of regular class meetings. She reached out to area pastors for recommendations – were there women in their churches who would benefit from this kind of training? Hoping for 40 women to sign up, they welcomed more than 120 women from 21 area churches – some traveling from two hours away.

The groundwork was in place to train these women to go back to their churches and teach. In addition to learning how to study the Bible, classes were also provided to learn how to teach the Bible. “We try to give them a safe environment to practice. It was a really sweet time. In each of the small groups where the women practiced, everyone had a feedback sheet. They got immediate verbal feedback. I moderated between the women in the class and the person presenting – trying to provide gentle, constructive criticism and encouragement.

“People should be rightly terrified of communicating the Word of God. We need an attitude of awe and respect – it’s a holy privilege to stand up and say, ‘thus says the Lord.’ We need to understand the right kind of fear that’s necessary for the task. There are women who could teach, but they are intimidated by their lack of training, or maybe they’re comparing themselves to the ‘superstars’ and think they’re not good enough. When someone tells me that they don’t have the gift of teaching, I always ask: ‘Are you absolutely sure?’ If teaching doesn’t come naturally to you, that doesn’t mean you can’t teach. God is able to equip you to fulfill a need in his church. I believe if there is a persistent need in the church, we should try to fill it, regardless of what we think our gifting is.

“My theological studies drove me to share the gift I was given at RTS – to make it accessible for women who did not have the opportunity to go to seminary. It’s essential to provide the kind of atmosphere where we can ask questions and feel safe. Questions reveal our idols, our doubts, our fears – we learn by asking questions. That is one of the gifts of a live teacher whether in Sunday school, a women’s Bible study, or a seminary classroom.”

Sarah Bruner was a student in that first class: “The description of the program was simple yet profound: invest in women for a full year of training in order that they may return to their local Central Florida churches and step out in confidence with their ‘tool belt’ filled in order to exegetically teach the Bible. For me, what happened in these monthly meetings forever changed me. Each time we met, I learned more. We dug into the realities of observation, genre, looked at cultural and historical contexts, talked about teaching Scripture from a redemptive perspective, and learned the realities of writing a Bible lesson…and all the while we were consistently reminded of the never changing Word of God.”

People should be rightly terrified of communicating the Word of God. We need an attitude of awe and respect – it’s a holy privilege to stand up and say, ‘thus says the Lord.’Leigh says that people have appreciated the fact that RTS wants to make a difference in the community. “Our seminaries are grounded in communities. Our professors and staff are grounded in local churches.” After that first course, she joined friend Nancy Guthrie for her Help Me Teach the Bible podcast to talk about the program. She received hundreds of emails from around the country (The Gospel Coalition and Phoenix Seminary partnered to provide a similar course) and around the world (a church planter’s wife was replicating the course in Southeast Asia). She is happy to see the program developing around the world. RTS Charlotte is currently providing the course and developed their own classes.

“The courses have been altered to each context; I provide a skeleton and people can flesh it out based on teachers and resources they have in their community. What’s happening in Charlotte looks different than what’s happening in Orlando, or Ireland, or Southeast Asia.

“After we did the year-long class there was so much hunger for what we would do next, so after our year long course, Scott Swain did a three-part series on covenant theology. This spring, Greg Lanier is doing a three-part series on the New Testament’s use of the Old Testament. All the audio from the first TWtT is currently in the RTS Resource Library as well as videos of the class on covenant theology. We are pleased to play the role of convener – we have the resources and can equip women in a way that’s really special. It’s a privilege for us to be a blessing to Central Florida.”

Teaching Women to Teach is a remarkable program that has equipped scores of women in churches around the world. And it all began when a mature spiritual mother – her health fading – chose to invest her time in the life of a determined young believer. A woman’s most valuable resource for learning to study and teach God’s Word may just be another woman seated in the next pew.

Lynne Wingard is a teacher and writer, and the wife of RTS Jackson Associate Professor and Dean of Students Dr. Charlie Wingard.

1Shellnutt, Kate. The Bigger Story Behind Jen Hatmaker: The benefits and challenges of women’s ministry in the age of bestsellers, viral blog posts, and inspirational conferences. Christianity Today, Nov 15, 2016.