This text message from Michael Card finally gave Dove Award-winning singer, songwriter, and author Ginny Owens the nudge she needed to pack up her life in Nashville, where she’d called home for twenty years, and move to New York City — mere blocks from Central Park — to pursue a degree at Reformed Theological Seminary.

Owens always wanted to go to seminary but felt too busy with her active music career and ministry. She had also long dreamt of living in New York, a city where conveniences like mass transportation are better suited for someone like Ginny, who has been blind since childhood. In 2018, these dreams converged.

2018, however, was not the beginning of her story with RTS. Growing up in Jackson, Mississippi and attending Presbyterian churches, Owens cannot remember a time when she wasn’t aware of RTS. Her grandfather Robert Ostenson was one of the founding pastorsof the Presbyterian Church in America, so it was no surprise that several of her aunts and uncles found their way to RTS, along with all her pastors and youth pastors. As a baby, she even lived at the RTS Jackson campus with her family.

Owens credits the influence of RTS for her early, solid foundation of faith during her formative years. She recalled, “I was taught not only the fundamental principles of the Christian faith but also why those principles are true. I learned to respect the truth and life-giving power of God’s Word.” The Westminster Shorter Catechism and concepts such as total depravity and predestination were part of her spiritual upbringing. 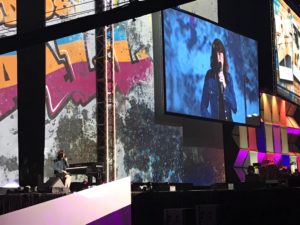 As a young adult, however, she began to wonder if her faith was too “heady” and not practical or actionable enough. She explained, “While I was surprised to learn that my non-Reformed friends had not been taught to think through their faith as I had, I appreciated, in that season, the ‘simplicity’ of their Christianity. In my mind, they trusted God instead of overthinking their faith.” When Owens moved to Nashville for college to study music education, she thought her days of being connected to RTS were over. God had other plans.

Over time, her thinking changed: “I began to learn from pastors such as Dr. Tim Keller that Reformed theology is a beautiful call to trust God while thinking out our faith. It is not an ‘academic’ theology meant to promote a cold and aloof Christianity, but a robust theology that aims to provide ways of answering the greatest questions about God and humanity — in every culture and every age — and ultimately, to bring its hearers into worship of their sovereign God.” Owens knew a thing or two about bringing others into worship of their sovereign God. 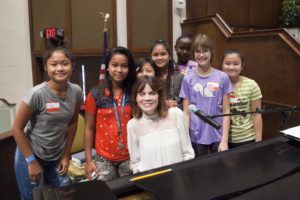 After establishing herself in the contemporary Christian music industry, a growing desire to become a more skilled and responsible Bible teacher and writer of theologically rich songs for the church drove Owens to consider seminary. She explained, “I knew I needed the rigor and discipline of the school environment to challenge and change me.” When that persistent pull toward seminary crescendoed into a fever pitch, she began the process of discerning the next steps, turning to her pastors and wise friends for counsel. Owens explained that if God spoke through opportunities, “doors to New York were flying open.”

At times, Owens dedicated herself full-time to her Master of Arts (Biblical Studies) program. During other times, ministry responsibilities meant she enrolled part-time to make space for songwriting, leading worship, speaking, and, more recently, penning her first solo-authored book, Singing in the Dark: Finding Hope in the Songs of Scripture, released in 2021. Over the past year, she has also had the opportunity to serve as Interim Women’s Ministry Manager and Assistant Director of Worship Arts at her church.

Whether pursued full-time or part-time, RTS New York City gave Owens further insight into God’s Word and taught her to think about how it could change her and her interactions with others. She reflected, “I’ve been blessed with professors who both teach these truths and preach to the heart. They beautifully communicate God’s Word and help us to wrestle with what it means for life beyond the walls of the classroom.”

“All my classes have challenged me to think about how I think.”What Owens learned about how to study Scripture helped her immensely with songwriting, teaching, and having a rich devotional life. It gave her confidence, without which, she explained, she would never have been able to write her book, lead a women’s ministry, or walk alongside others in various situations and point them toward truth. She shared, “While Bible survey classes have provided a wonderful overview of each part of Scripture and how to read it in the context of the bigger story of redemption, systematic theology classes have helped me understand how the Bible speaks as a whole on the most important topics: God, humanity, sin, etc. All my classes have challenged me to think about how I think, how our culture thinks, and how to apply the truth of God’s Word to every aspect of life — and to encourage others to do the same.”

Her classes have moved her to moments of conviction of sin, repentance, great hope, and joyful revelation. She continued, “These moments have brought about a deeper desire to share the love of Christ by every means possible. After all, he is our only true hope. Lives cannot be profoundly changed without him.”

Owens has always loved the tools Reformed theology provides for a deeper devotional life, and, combined with the training she received at RTS, she hopes to continue mining Scripture’s depths to walk more closely with the Lord. She shared, “With this foundation, my prayer is to, from now until eternity, become a wiser discipler, a bolder evangelist, and a more dependent and eager pray-er. I want the Lord to make me as useful as possible in his work, and I’m certain seminary has provided the next step of preparation in all that future work might be.”

As a recent graduate, Owens looks forward to using what she’s learned to continue to bring glory to God, his love, his truth, and the great mysteries of his gospel through song and word wherever — and however — he may lead.

Alicia Akins works in international education by day, is a part-time Master of Arts (Biblical Studies) student at RTS Washington, and is the author of Invitations to Abundance, published by Harvest House.