Perhaps never more than in the middle of the 20th century, American Presbyterianism was characterized by uncertainty and turbulence. But amid this turbulence, a calm figure, always in a suit and tie, a shock of white hair on his head, entered the pulpit. His presence in the pulpit was more than his erect posture, natural dignity, or powerful voice. It was the noble sense of his purpose that made such an impression on those who heard Dr. Robert Strong.

Born in Illinois in 1906, Robert “Bob” Strong met his future wife, Roberta Kirkpatrick, while studying in California. Roberta was a concert violinist who graduated from the Juilliard School of Music. They were married in 1933, a year before Strong graduated from Westminster Theological Seminary in Pennsylvania. Dr. Strong’s daughter, Patricia (Patty) Strong Barrett, remembers that he always spoke positively about his wife, praising Roberta and her personality.

In that generation, next to Machen himself, Strong was probably the staunchest advocate for biblical, theological truth.In a memorial about Dr. Strong after his death in 1980, Dr. John R. de Witt, former professor at RTS Jackson, writes, “Though [he] was distinguished in every part of the ministry, it was especially as a preacher that he excelled.” Dr. Strong’s son, James “Jim” Strong, remembers, “Even as a child, people talked about what a good preacher my dad was.”

Rev. Claude McRoberts is the current senior pastor at Trinity Presbyterian Church and says Dr. Strong’s impact cannot be overstated. “Many people would say, ‘I didn’t know what it was to be a Christian until I sat under his teaching or served as an officer in the church.’ He inspired people to think when he was preaching.”

“Soaring above the whole range of the truths which he expounded from the pulpit was his manifest determination to preach, to preach always the Lord Jesus Christ,” writes Dr. de Witt. 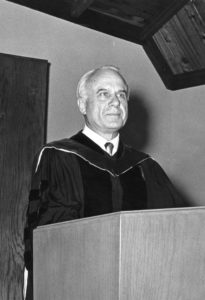 “He was the example of someone who spoke with a love and sincerity for the Word of God,” says Guy Richardson, President Emeritus at RTS Jackson. Dr. Richardson sat under Dr. Strong’s ministry at Trinity and then studied at RTS during Dr. Strong’s time as a professor. “He obviously spent great labor in having sermons with depth and thought-provoking application.”

Strong says preaching is what people remember his father for most. “People enjoyed hearing him preach. His sermons were intellectual, biblical, spiritual, and well-articulated.” But behind the scenes, he says that while his father never preached “off the cuff,” his sermons were not always meticulously planned. “He composed his sermons…by the seat of his pants. But they were well-educated pants!”

Barrett described her father as a natural preacher, “[Preaching] was as natural as brushing his teeth… He just opened his mouth, and it happened.” She also remembers her father praying every morning, often kneeling beside his bed for 30 minutes to start the day.

Although Dr. Strong left his role as pastor of Trinity to teach at RTS, Strong says the burden of preaching was deeply rooted in his father. “He never really retired from active ministry,” he explains. “He was preaching in a little Presbyterian church right there in Pensacola, [Florida,…] until the Sunday before he died.”

Weiss, who currently serves as a ruling elder at Trinity, says Dr. Strong’s ministry was formative for him as a young man. “I’m frequently amazed at how much theology I absorbed through my junior high and high school years under his preaching,” he reflects. “It was a blessing for me and a tremendous blessing for the church.”

“His example sets a legacy that would be hard for anyone to surpass,” says Dr. Richardson. “He was accessible and very pastoral.”

Dr. Strong represented a generation of bold ministers who “bore courageous testimony to the ancient faith.”Dr. and Mrs. Strong also made time for their children and grandchildren. Barrett has memories of playing chess and riding roller coasters with her father. She shared that her children, to this day, “talk about what Bob said. You can just see the influence he had on their lives.” She also still remembers her father telling her, “Patty, don’t major in minors,” a saying that has stayed with her throughout the years.

Dr. Strong’s leadership ability and zeal for the purity of the church set him at the helm of the effort to restore confessional evangelicalism in Southern Presbyterianism. His unwavering voice could be heard in the church courts, raised in defense of the church’s confessional heritage and the integrity of the gospel. To Dr. de Witt, Dr. Strong represented a generation of bold ministers who “bore courageous testimony to the ancient faith. They were not many in number, and the tide which swept others away could only be resisted at great cost to themselves.”

Though American Presbyterianism was fractured, Dr. Strong never wavered in his devotion to the church, particularly the congregation at Trinity, where he spent most of his ministry. According to Dr. de Witt, Dr. Strong never sought personal advancement or accolades in his life and witness. Although disunity grieved him, he never turned aside from those who were brothers and sisters in Christ.

Broad in his sympathies but narrow in conviction, he remained in the Southern Presbyterian Church (PCUS) as long as he felt he could minister faithfully under the constitution of the denomination. He remained at Trinity until he accepted a position as professor of homiletics on the faculty of RTS Jackson.

Dr. Strong’s history with RTS goes back many years to conversations with Sam Patterson during visits to Belhaven University. Jim Strong remembers his father was passionate about the possibility of what would eventually become RTS: “He was enthusiastic about it because he wanted there to be a seminary that would be the truly conservative, biblical, scriptural side of preaching.”

To honor Dr. Strong’s legacy, RTS has established the Robert Strong Chair of Homiletics. Strong says this chair memorializes his father’s lifetime of faithfulness and will inspire future and current pastors to be zealous ministers of the gospel. “He was a successful servant of the Lord who labored virtually 24/7, doing the Lord’s work until he died at age 74.”

Matthew Bryant, Senior Vice President of Development for RTS, shares, “A few years ago, I had the honor of meeting Patty Strong Barrett. It’s been a privilege to know her and to hear and see her determination to honor her father in this way. Her generosity, as well as that of others impacted by Dr. Strong, is a testament to the importance of preserving his legacy through this chair. It’s exciting to think of the generations of students who will follow and benefit.”

“His preaching, prayer, and pastoral care, and preparing the leadership — obviously those were Robert’s commitments,” says Rev. McRoberts. “We want to have alumni like that from RTS.”

Dr. Richardson believes that today, Dr. Strong’s primary desire for RTS would be what he exemplified in his own pastoral ministry and in his teaching at RTS: staying true to the Word.

RTS is grateful for the ongoing generosity of the churches, friends, and family of Robert Strong who have faithfully contributed to the Robert Strong Endowed Chair at RTS Atlanta. With a goal of $3M, this endowed fund will support a faculty position in homiletics.

To learn more or to inquire about how you might contribute, contact Sheldon Nordhues, Director of Development at RTS Atlanta at snordhues@rts.edu or (770) 952-8884.

Mary Davis is a Canadian transplant to the South. Wife and mother by day, she moonlights as a freelance writer and editor.