Jared and Suzanne Olshefski have always had close friends who are pastors, missionaries, or others working in some capacity on the mission field. Seeing their sacrifices often made Jared wonder, How am I serving the Lord behind a desk? Should I be on the mission field somewhere?

During a time when this dilemma was weighing heavy on Jared, he attended a providentially-timed luncheon at Reformed Theological Seminary, Charlotte with Dr. Michael Kruger, who addressed that very topic. “Mike said there isn’t a shortage of students at RTS who want to be pastors and missionaries, but a much more pressing need is men and women who can give financial resources so that those students can be trained at RTS and sent into pulpits and onto mission fields where they will impact thousands for Christ,” remembers Jared. “Those words gave me purpose beyond profits.”

“Long ago, my dad established tithing as a standard annual practice for our business.” This practice of giving laid the foundation for an eternal business perspective. “We started to change the direction of our business to focus on long-term impact for the kingdom,” says Jared. “That has been far more energizing than more dollars in a portfolio.”

The Olshefskis learned years ago that giving to a ministry can be a conflicting thing. Giving can bring joy when humility is at heart or self-righteousness when pride has taken hold. But Jared says that when they came to realize that all blessings come from the Lord and everything is his, they found new freedom in giving what the Lord had given them.

“We realized that writing a check is no different than a parent handing a child a dollar to put in the church offering plate. This concept of giving what isn’t ours and getting to experience joy in the process is an incomprehensible gift from the Lord, one that we have undeservingly been able to witness.”

But with so many institutions and ministries looking for donors, why does RTS stand out to the Olshefskis?

“This concept of giving what isn’t ours and getting to experience joy in the process is an incomprehensible gift from the Lord…”Jared and Suzanne say that what pulls most heavily at their family’s heart is the seminary’s faithful commitment to the kingdom. “RTS has held true to its mission since it was founded over 55 years ago . . . It seeks to hire and train up men and women who love the Lord and are dedicated to the inerrancy of the Bible.”

“In the 1960s, doubting Christians said a seminary started in Jackson, Mississippi didn’t stand a chance to succeed,” prompted Jared. “But founding evangelist Sam Patterson responded with a question: ‘How big is your God?’

“When our family is faced with situations where blind unbelief comes out in others or within ourselves, we are reminded of Sam Patterson’s question,” Jared says. “His words demonstrated a deep level of faith that was clothed in unashamed boldness, which is necessary for a seminary or any person trying to follow Christ in today’s world.

“Suzanne and I feel a deep appreciation for a seminary that will send out pastors and missionaries who believe and teach the whole Bible, as it is.”

The Olshefskis have close family ties to RTS.

In 2007, Jared’s brother, Jordan, was living in Pennsylvania and working for QBW when he sensed a call to ministry. Jordan discussed it with a friend who promptly visited the RTS website and requested a student application be sent to Jordan’s house. The groundwork had been laid. That summer, during the week Suzanne and Jared were married in Charlotte, Jordan visited the Charlotte campus of RTS. He went on to receive his MDiv from RTS Charlotte in 2011 and has served in ministry in Charlotte ever since.

“Through Jordan’s experience and passion for RTS, our family has felt a close connection to the seminary,” says Jared. 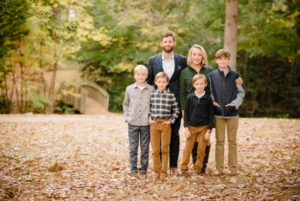 “While we’ve had the privilege to hear many remarkable stories over the years, most notable has been a theme that is so often repeated…which is that most students at RTS are there because the Holy Spirit convicted someone to be generous and they answered the call.”

The Olshefskis say this has changed how they think about their business and their financial support of ministries like RTS. “I stopped looking at business deals for what the deal means for the bottom line,” Jared explains. “Instead, I began to think, If we close this deal, what will this do for the kingdom? How many students can we get to RTS to send out onto the mission field?

“Pursuing a life in ministry requires great sacrifice, so it’s all the more humbling to meet men and women who are willing to follow the Lord’s call, even when they aren’t sure how they will be able to afford it,” says Jared. “Those stories should cause any Christian to offer support, especially financial support when possible.”

Mary Davis is a Canadian transplant to the South. Wife and mother by day, she moonlights as a freelance writer and editor.