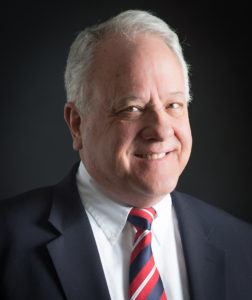 Howard Griffith succeeded in preaching his own funeral sermon. His life was his testimony: as Christian, husband, father, friend, pastor, and teacher, Dr. Griffith effectively taught the doctrines of grace and Christ-like humility to his family, friends, congregation, and students.

Dr. Griffith served Reformed Theological Seminary for 17 years as a Professor of Systematic Theology. Prior to his tenure at RTS, he served as pastor of All Saints Reformed Presbyterian Church for 23 years. Dr. Griffith bravely fought a battle with cancer and passed into glory on March 20, 2019.

Family and friends contributed poignant testimonies to his life and ministry. His son, Alex, said,

“My dad took [fatherhood] very seriously, both when we were young and as adults, and we learned many things. We learned humility and curiosity, and gentleness and passion for the truth, and that started at a young age. As kids, my dad loved to translate whatever he was learning into language we could understand. As adults, my dad continued to learn how God wanted to use him as a father.

“He shared with me…his prayer was to be an example of what our heavenly Father is as a father to us. Specifically, he wanted to be an example of grace, not just of wisdom and truth, but of grace. He did that in many ways throughout his life, but especially over these last ten months as he struggled with cancer. I’ve never experienced anything like witnessing my dad draw close to the Lord, and I know it’s an example that taught our family how to be obedient to the Lord and to trust his goodness. He was an example of what it was to be weak, and what it was to be transformed.” 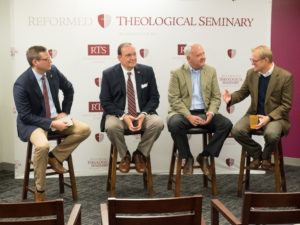 “It was my second semester at RTS, and I was taking Worship with Dr. Griffith. One of our assign- ments every week was to write a prayer on a doctrinal topic that he would assign. Then each class he would select someone to come up and lead prayer in front of the class, and we would talk about how it went. One week the topic was hell— a pretty tough one to lead prayer on!

“One of the students in class was from Wesley, a woman seeking ordination in the Episcopal Church, and it was her week to lead. I remember her walking up to the front of the class holding her paper so tightly. She quietly started with… ‘I’m not really sure if I believe in hell or not, but I’m going to do the best I can.’

“And with that, she began praying. When she was finished, I looked to the back of the room. I just knew Dr. Griffith, our resident theologian, was going to set her theology straight. But he didn’t. Instead, he responded with remarkable kindness and gracious encouragement. I wanted Dr. Griffith to show her how right we were. He wanted to show us all how beautiful the grace of God is. Jesus doesn’t hurt hurting people, and neither did Howard.”

“Howard Griffith was a disciple of Jesus—a student in the school of Christ. In God’s good providence, the calling of student life was at the heart of our friendship throughout our days.

“We came to know one another in seminary. The experience forged a bond—something like that of comrades in combat—a bond formed by shared terror (of a beloved professor) and by opposition (from the rest of the faculty and the largest part of the student body). We were at a liberal seminary—a reality we were willing to endure because we wanted to study with one of the greatest teachers of Reformed theology in our time, John Gerstner.

“After seminary, Howard took up the work of a pastor, while I became a teacher in a Christian study center. But we remained students together, often by phone, and, when we could, in person— recommending books and enjoying great conversation about what we were learning. Over those days we both became students of the work of the Church as well, studying carefully the directions our Lord had given for its good order, and applying those lessons to the multitude of issues that would come before the annual meetings of the denomination.

“Later we were Ph.D. students at Westminster Seminary…together again.

“Then came the cancer! What a curse! But what a blessing. Howard and I were reunited as in our student days by his illness—trips to and from treatment marked by long conversations about what we were studying. Sitting with him in his living room as we talked about what he was learning from the ever-changing stack of books faithfully by his chair. Calvin, Augustine, Berkouwer. Such bittersweet days. But student days again, in the school of our Savior!” 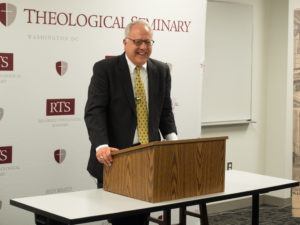 “I can’t tell you how many times I saw students enter into his office situated next to mine to seek his counsel in areas related to their personal lives. I can’t tell you how many times students have reiterated to me something he said to them, how he prayed for them, how he called them or emailed them just to see how they were doing. You see, Howard left full-time pastoral ministry over a decade ago, but he never stopped pastoring, and a generation of pastors and church leaders are the better for it.

“I met with Howard that two weeks [before his death]. He was a bit tired, but as we talked about some decisions facing the campus, he got that flicker in his eye. Exciting things were happening. We were moving into a new campus, considering a new faculty hire, and as I had come to expect, he had wise advice to offer and he offered advice freely. And I took it.

“But afterward, he leaned forward in his chair, and said, ‘Scott, I am not trying to force you in anything.’ He recognized his words might carry too much weight, that I might feel bound to do exactly what he said in his weakened health, and he didn’t want me to worry. He was ministering to me. I had come to expect that too. He was not just a colleague, not just my academic dean, he was my friend. And at times, he was my pastor.”

In his November 19, 2018 sermon Treasures in Jars of Clay, Dr. Griffith preached on the resurrection power of Christ demonstrated through the weakness of the believer.

“When he [the apostle Paul] was called on to defend this ministry, he did it by showing his weakness,” Dr. Griffith explained. “And it’s just in that weakness that the power of the resurrected Christ is made evident. There’s no other way. It can’t be done any other way. Suffering with Christ is not the exception in the Christian life. It’s the rule of the Christian life. So, when we ask about the ministry of our church, when we ask about what we’re to expect going forward, what should we expect? Well, we’re to expect to see resurrection power, power made evident only through suffering with Christ.”

Dr. Griffith gave countless lectures that students can recall decades later, preached sermons still held in the hearts of congregants, and wrote A Brief Testimony to God’s Grace, in which he used the words of his favorite hymn, “I Greet Thee Who My Sure Redeemer Art,” to trace the grace of God throughout his illness. But far beyond any lecture, sermon, or written testimony, Howard Griffith’s life itself proclaimed Jesus as the believer’s comfort in both life and death. Dr. Griffith pursued the glory of God and the good of the church with steadfast humility, gentle courage, and clarity of thought. His legacy continues to hearten faithful Christians as his family, friends, colleagues, and students remember his life and ministry.