How should we understand the book of Revelation? Dr. Thomas Keene shares the important things to keep in mind when studying Revelation and encourages believers not to be intimidated by its symbolism.

Revelation is a very challenging book to read, and it’s intimidating at spots. When you get into the depth of the imagery there, it can be very disorienting to read. Yet the first five verses tell you everything you need to know about this book, because in the first five verses, the very beginning of the book, John tells you exactly the kind of book that you’re reading. There’s three components to it. You’re reading three kinds of things.

Revelation Is a Letter

Biblical prophecy is not just about telling us the future. It does do that, but it’s telling us the future in order to motivate us in the present.You’re reading, first of all, a letter. This is something we sometimes miss. But Revelation is, from the beginning, intended to be a letter. It doesn’t just contain letters—the seven letters in Revelation 2—Revelation is a letter to those seven churches. Any interpretation that severs meaning from those seven churches is one we should be cautious about. We need to make sure that our interpretation is available and accessible to them. It might have nuances in development and applications that they aren’t aware of, but we can’t sever the letter of Revelation from its original audience. If we make it too much about 21st-century politics and not about the universal struggle of Christ and his church against the forces of darkness, then we’ve taken a misstep. It’s a letter.

Secondly, it’s a prophecy, and particularly it’s biblical prophecy, and biblical prophecy has its own contours to it. Biblical prophecy is not just about telling us the future. It does do that, but it’s telling us the future in order to motivate us in the present. It’s calling us to do something on the basis of some future reality. In particular with Revelation, it is a reminder that Jesus wins, that he will conquer the forces of darkness no matter how dark it gets, no matter how troubled you might be, nevertheless, he is our white rider, and he will come and he will bring victory to us and to his church. That reminds us of his victory and as a result, it encourages us to persevere to the end.

So it’s a letter, it’s prophecy, and the third thing is that it’s apocalyptic. This is perhaps the most difficult one to understand because we don’t have this genre or any kind of parallels to it in our own modern context, but apocalyptic literature is just highly symbolic literature. It’s talking about the present and the future. It’s talking about the real world, but it’s doing so in highly symbolic ways. This is sometimes very disorienting, very scary. How do I interpret all these symbols? What do all of these horns mean? What does all of this detail entail? But the way to interpret symbolism is actually pretty straightforward: let the narrative drive your interpretation. 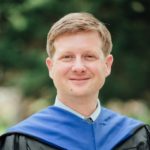