Could Jesus have sinned? Behind that question is a very good question and that is: if he couldn’t have sinned, was Jesus genuinely human? And of course we hold dear texts such as Hebrews 2 and 4 which tell us that Jesus was made like us in every way except for sin. So is one of the ways that he was made like us, so that he can be our representative and indeed he can continue in his high priestly office to be empathetic to us, is part of that the fact that he, while he was tempted, could have sinned?

So when we think of the question, “Could he have sinned?”, we actually need to be asking, “Could the Son of God, the Holy One, the eternally Holy One, have sinned?” And the fact that the person of Jesus Christ is the Son of God would mean that we would be entertaining the question of whether God himself could sin, which of course is contrary to his nature, so his person would have prevented him from ever sinning.

When we think of the Son of God—fully God, fully man—assuming a human nature, the Son of God incarnate experienced the anointing and the fellowship and the power of the Holy Spirit beyond measure, beyond the capacity of any human being that has ever lived. And so that presence, that unmitigated presence, of the Holy Spirit throughout his life would have steered him clear of any danger of sinning.

One of the key distinctions between us in our experience of temptation and Jesus is that while his temptation was real, it came from the outside. Our temptations, yes, come from the outside, but we also have a sinful nature, and so we are drawn away by our lust that bubbles out of our sinful nature. James talks about this in James 1. Jesus had no traffic, he had no knowledge intimately with sin, and you could say as a result of that, when the temptation to sin came near him, that this actually heightened the experience of temptation, not made it just shadowboxing in some sense.

We who know sin so intimately, both because it comes out of our nature and we’re surrounded by it all the time and give into it, temptation for us isn’t that hard. It’s not that heightened because we give into it so easily. But if you think about Jesus never giving in, never giving into temptation, and he being the Holy One, that would have made his experience of temptation all the more exasperating, difficult, a challenge because he had never given into it before.

Lastly I think we need to remember that sin is not fundamental to what it means to be human. And we need to remember back in the garden humanity was created good. We need to remember that of course Jesus was conceived by the Holy Spirit, and he did not share our sinful nature, and he himself did not sin. But the fact that he didn’t have a sinful nature does not make him any less human. Not only was humanity created without sin, our eternal future in the new heavens and new earth will be lived out; man and woman fully alive in it will be unstained by sin just as our Savior is unstained by sin. 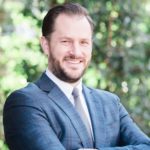