With campuses in Jackson, Orlando, Charlotte, Washington, D.C., Atlanta, Houston, Dallas, and New York City — along with online courses — Reformed Theological Seminary has a global presence that produces local fruit. The Dallas and Houston campuses prepare students to serve Texas and the greater Southwest. RTS Dallas’ strong relationships with local churches and intimate classroom settings were some of the draws for third-year, full-time Master of Divinity student DeMyron Haynes. 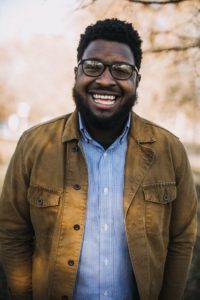 Haynes, a full-time pastoral resident at Grace Presbyterian Church (PCA), located in Shreveport, Louisiana, his hometown, did not end up in Dallas by chance. The North Texas Presbytery, made up almost exclusively of churches in North Texas, including Dallas, also includes one single church in Louisiana: Grace Presbyterian. Attending RTS Dallas allows Haynes to interact with and learn alongside classmates who are also under the care of the same presbytery and with fellow North Texas Presbytery ministers.

But his choice was about more than just geography and proximity. Haynes described what made RTS Dallas stand out. “As I began to think about what type of minister I wanted to be, I found myself desiring to attend a seminary that would train me to be an ordinary, simple pastor in the Reformed tradition… I chose RTS ultimately because I was impressed by the ‘type’ of ministers that RTS was producing. They seemed to be producing ministers who were committed to shepherding their respective churches by preaching the gospel, administering the sacraments, and praying that God would do glorious things in their churches and communities.”

Small class sizes that allow for close relationships with professors were also a plus. “Each of my professors, particularly Dr. McDowell and Dr. Yoder, have been intentional in pastoring me and other students,” Haynes explained.

“I chose RTS ultimately because I was impressed by the ‘type’ of ministers that RTS was producing.”His classes are a large part of why he and his family have managed to continue trusting the Lord through a seminary experience marked from the start by personal suffering. He preached his first funeral when his beloved grandmother died during his first week of classes. In his final year, his second son will undergo chemotherapy.

Various lectures, professors’ prayers, and assigned readings have buoyed his confidence in God’s sovereignty, and he now sees suffering as a form of seminary itself. He explained that “the Lord not only uses seminary to shape his servants, but he also uses the cauldron of life to make ministers who are strong, gentle, kind, and who are acquainted with grief.”

In addition to buttressing his faith, his courses have also equipped him to, as he put it, “be a faithful, ordinary pastor who preaches God’s Word, who walks alongside God’s people, praying for and with them, celebrating and grieving with them as they seek to follow Christ in their respective callings.” As he comes to Scripture and the confessions of the church, he frequently finds himself asking how they come to bear on particular issues of the day.

While he admits his education hasn’t given him answers to all his questions, it has been immensely helpful in many ways. Haynes explained that what he has learned has given him the tools — tools necessary for these times — to “think theologically and pastorally about various pressing issues.”

When it comes to training in leadership, Haynes credits his professors as being most influential, learning not only from their expertise, but from who they are. How they live has, in many ways, been as powerful as what they teach. “It has ultimately been my professors who have made me a better leader by modeling Christlike leadership. Each of my professors in their own way has emphasized the necessity of the humility, prayer, conviction, and joy that is needed to be a good leader,” Haynes shared.

Haynes believes “it takes a church, a presbytery, and a seminary to form healthy pastors (at least in the Presbyterian and Reformed tradition).” By connecting knowledge with practice, the joint pursuit of seminary at RTS Dallas and his Grace Presbyterian pastoral residency are preparing him to become fit for ministry. Grace Presbyterian Church provides him with the opportunity to be discipled by his pastor and to serve and walk alongside “a community of broken people redeemed by the gospel of Jesus Christ”; RTS Dallas provides him with instruction, training, role models, and tools to nurture a mind for truth and heart for God with a view to a life for ministry.

Alicia Akins works in international education by day, is a part-time Master of Arts (Biblical Studies) student at RTS Washington, and is the author of the forthcoming book, Invitations to Abundance, with Harvest House Publishers.