Change is your opportunity to grow in grace. We say that it’s hard, but that’s not completely true. Change can be easy when it’s something we’ve hoped for, prayed for, and planned for. Difficulties come when we try to adapt to changes that are unwanted and unmanageable.

Remember your trajectory. When you become a Christian, you are marked for change. One of God’s promises to you is that you’ll be transformed over the course of your life to be made more like your Savior.

The process of sanctification is both beautiful and painful. Outwardly, the world is changing, exerting pressure that we become like it. Inwardly, the Holy Spirit works to mortify sinful passions and vivify holy desires. Through both internal and external forces, God is at work, enabling us “more and more to die unto sin and live unto righteousness” (Westminster Shorter Catechism 35).

Nothing about this process is easy. How do ministers adapt — especially to change that affects their pastoral ministry? Some, overwhelmed, give up and abandon the pastorate. Difficult circumstances emerge, and they don’t go away. Their inability to cope saps them of their love for people and their joy in ministry. They become frustrated and are left confused, angry, or both.

Others give up but stay in ministry, trapped by economic concerns and stuck in a vocation that no longer satisfies. They go through the motions, silently suffering, and their congregations suffer, too, as they are deprived of the fully-engaged pastors they need.

Still other ministers go looking for change and exhaust themselves as they try to ride every new wave.

But there are ministers who thrive during change. They see it as an opportunity to grow in grace; they believe the results will leave them stronger in faith and better prepared to serve the Lord and his people.

I’ve thought about these themes a lot since my ministry began 42 years ago as a student pastor in rural Middle Tennessee. During these years, I have changed, and the world has changed.

When I started in 1980, both the Cold War and the Soviet Union seemed permanent fixtures in the geopolitical landscape. Terrorism was far removed from American soil. Same-sex marriage and gender fluidity were fringe ideas. In my area of the country, one had to strain to detect the differences between candidates of the two major political parties. Personal computers, smartphones, and social media — what are they? The most recent pandemic was six decades behind us, remembered by few, with a possible recurrence feared by even fewer.

I want to approach the subject of change as both personal and societal. My hope is that you will embrace it — not with fear, but with faith in God’s sovereignty, his concern for the welfare of his people, and his personal care for you. Change is not something to be feared (or to be overly excited about) but an opportunity to minister the gospel within the context of our historic Reformed faith. I’ve not followed my own counsel perfectly, but here’s what I tell students and pastors.

Read the rest of this article on pages 34-39 of Ministry & Leadership or at The Gospel Coalition. 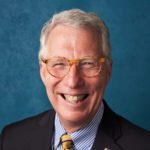 Charlie Wingard (DMin, Greenville Presbyterian Theological Seminary) serves as Professor of Pastoral Theology and Dean of Students at RTS Jackson. Since February 2016, Charlie has also served as Senior Pastor at First Presbyterian Church in Yazoo City, Mississippi. You can follow him on Twitter.