The Hebrew word for “futility” or “vanity” (hebel) is the most used word in the book (occurring 38 times!) and is highlighted by the opening line of the prologue in 1:2, “vanity of vanities, says the Preacher, vanity of vanities! All is vanity!” In a book focused on exploring the nature of life “under the sun” and deducing the meaning for that life, the posing question is: how is life “under the sun” not vain? While the futility of life “under the sun” is the particular focus of the book, there are some glimpses of hope that stem from how the fear of God is seen in Ecclesiastes. The overarching “vanity” that the Preacher speaks of can be seen in relation to the one call that brings us out of this vanity: that we would “fear God and keep His commandments” (12:13).

The worldly-minded focus of the vanity in Ecclesiastes is highlighted by the specific content that the Preacher is examining. The phrase “under the sun” occurs 29 times in the book, along with analogues such as “under heaven” (3 times) and “upon the earth” (3 times). One of the first things that the Preacher claims in the main body of his work is that he has tasked his heart to “seek out” things that are “under heaven.” In so doing he has seen “everything that is done under the sun” (1:13–14). This illustrates that the particular object being observed is the worldly or “under the sun” life that the Preacher investigates and reveals as “vanity and a striving after the wind” (1:14). The entire first half of the book is, in essence, a cornucopia of this vanity: hedonism (2:1–11), worldly wisdom (2:12–17), work (2:18–23), passing on a legacy or large inheritance (2:21), power (4:13–16; 5:8–9), relationships (4:4–12), wealth (5:10–6:9), and even justice and righteousness (3:16–22). The reason for this vanity is specifically because of their worldly-oriented or worldly-minded “under the sun” focus.

As the mind of the Preacher is caught up with these worldly things, he seeks them out to see whether they can provide a meaningful life. He consistently concludes that they cannot, that all is vain. The ultimate vanity for this worldly-minded focus is found in that the end of all mankind is death (3:18–22). If all life ends in death, then all of life is vain, for “who can bring him to see what will be after him?” (3:22).

The resolution to this worldly-minded vanity is found in fearing the Lord. In Ecclesiastes, there is only one individual who transcends this “under the sun” reality that may give intelligibility to this life: the Lord. In contrast to the temporality of the worldly order and all of man’s deeds, the God that we are called to fear is eternal and ordains whatsoever comes to pass (3:14–15). The resolution to the issue of man’s temporality is a focus on the eternal God.

Moreover, this eternal God whose deeds “endure forever” is notably not located “under the sun” but is “in heaven” while we are “on earth” (5:2); therefore, we must fear him (5:7). The answer to the Preacher’s rhetorical question of “who can bring [man] to see what will be after him” is the eternal God of heaven! This is also seen in the call to “fear God” in 7:15– 18 where the presenting issue is that both the righteous and the wicked, the wise and the fool will perish, but the one who fears God “will come out of both of them” (7:18). The connection of the ultimate vanity of death and the call to fear God is also seen in 8:10–13 where it is explicitly stated that, “I know that it will be well with those who fear God, because they fear before him” (8:12). You must be radically heavenly-minded if you are to be of any earthly good.

The fear of God in these passages takes one’s gaze off of worldly things and places them on the God of heaven. It is in proper fear of the Lord that the worldly-minded focus of man is corrected with a heavenly-minded fear of God. It is in living one’s life before the God of heaven rather than worldly things that renders a life that is not in vain. An old saying has unfortunately permeated the church: “don’t be so heavenly minded that you are no earthly good.” The teaching of Ecclesiastes is the opposite: in order for your earthly life to not be “vain,” you must fear the God in heaven. That is, you must be radically heavenly-minded if you are to be of any earthly good.

It is in the heavenly-minded fear of God that you can properly engage in your labors in service of the God in heaven (1 Cor. 15:58), that you may properly treat your wealth as a steward of the Lord, that any worldly authority you may (or may not) possess may be properly oriented as under the Lord who ordains all things, that you may escape the love of temporal things to be consumed with a love of eternal, heavenly things. Heavenly-mindedness is not something that diminishes one’s ability to properly live in this life. It is the only way that one may properly live a life that is not in vain, for to be heavenly-minded is to fear the God in heaven rather than to be consumed with everything that is “under the sun.” The apostle Paul summarizes this call to heavenly-mindedness well in Col 3:1–2: “seek the things that are above, where Christ is, seated at the right hand of God. Set your mind on things that are above, not on things that are on the earth.”

The wisdom of God is not the wisdom of the world; we must rest in God’s wisdom rather than man’s understanding.The worldly-minded focus of the Preacher has a corresponding worldly wisdom. One might be surprised to find that in 2:12–17 being wise is described as vain. This is because along with a vain worldly-mindedness there is a vain worldly wisdom. When addressing these worldly-minded issues, the Preacher engages them with worldly wisdom. We see this in his mode of investigation where eighteen times in the book the Preacher rationalizes his conclusions with “I have seen it.” Furthermore, while the first half of the book reveals the vanity of worldly-mindedness (chapters 1–6), the second half is dominated by skepticism concerning worldly wisdom (chapters 7–12). The Preacher has put on the spectacles of worldly-wisdom to consider worldly things and has rendered a verdict: both the object as well as the mode of investigation have proven fruitless.

The wisdom of God is not the wisdom of the world (1 Cor. 1:18–31; Isa. 29:14); in order to properly investigate the nature of life we must rest in God’s wisdom rather than man’s understanding. It is again in reference to the “fear of God” that the Preacher is redeemed out of worldly wisdom; as we approach the God of heaven in fear, we are called to “draw near to listen” (5:1). A proper fear of God is seen in how one listens to God rather than to the world or even to your own understanding (Prov. 3:5–8). In this internet-connected age, we have more access to information that calls for our attention than ever before.

So, the question of what you will listen to is all-important. Do you listen to celebrities? Politicians? Random blog posts? Yourself? In the midst of our culture that is dominated by the mentality of “I speak my own truth,” we need more than ever to understand that this too is vain. The call of Ecclesiastes is that listening to the world (and even yourself) produces a vain worldly wisdom, but that the one who fears God listens to him. The one who fears God gains understanding for life not in worldly-minded wisdom but in listening to God. God has revealed in his Word all that is needed for faith and life. Listen to him! Indeed, a good test to determine whether or not you truly fear God is whether or not you listen to him by being obedient in all matters (whether in doctrine or in life) to what is found in Scripture.

Don’t listen to the world; don’t trust in your own understanding or worldly wisdom. Fear God and listen to him. Listen to the God who is from eternity and ordains whatsoever comes to pass (3:14), who speaks from heaven and reveals all he requires for faith and life (5:1–7), who calls those who fear him out of worldly-mindedness (7:18), and who promises that it will go well for those who fear him (8:10–13). This, indeed, is the end of the matter, the way to know that your life is not futile, that your end is not vain: “fear God and keep his commandments” (12:13). And so, for you who fear the God of heaven and listen to him, “be steadfast, immovable, always abounding in the work of the Lord, knowing that in the Lord your labor is not in vain” (1 Cor. 15:58) 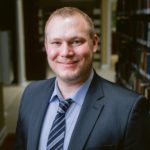 William Wood is Assistant Professor of Old Testament at RTS Atlanta. He completed his M.Div at Westminster Theological Seminary, where he also earned a Ph.D. in Hermeneutics and Biblical Interpretation with an emphasis in Old Testament.