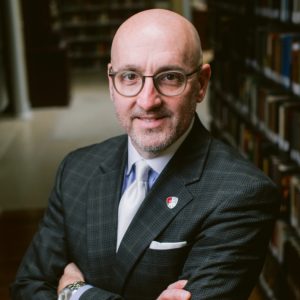 Dr. Richard has been serving on the faculty of RTS Atlanta for just over three years, where he also serves as Executive Director. He has a Ph.D. in Historical and Systematic Theology from the University of Edinburgh in Scotland. Prior to coming to Atlanta, he served as senior pastor of First Presbyterian Church (PCA) in Gulfport, Mississippi. During his 12 years in Gulfport, he led the congregation in the aftermath of Hurricane Katrina, which completely destroyed the church facility and many homes. Dr. Richard has written several books, many articles and chapters in academic journals and books, and an extensive number of devotional articles for more popular magazines and journals. Guy and his wife, Jennifer, have three children.

Dr. Robert Cara, Provost and Chief Academic Officer for RTS, commented on Dr. Richard’s promotion. “All RTS professors bring different gifts and emphases to their students. Dr. Richard has a first-class Ph.D. from the University of Edinburgh and has written highly academic works. He also brings a significant amount of pastoral experience and many pastoral publications aimed at a broad audience. His promotion to Associate Professor is well deserved.”

After his promotion, Dr. Richard shared, “I am profoundly grateful for the continuing confidence which RTS has shown in me and the work that we are doing on the campus here in Atlanta. It is a privilege to serve here at RTS and to invest myself in the lives of our students. I look forward to being a part of what the Lord is doing here for many years to come.”

RTS Atlanta is a growing campus located on eight beautiful acres just outside of the Perimeter in south Marietta. We have been training pastors, campus ministers, missionaries, educators, and church leaders in the Atlanta area for more than 20 years. We currently have around 200 students who are studying for the Master of Divinity degree, the Master of Arts degree (in Religion or Biblical Studies), and a variety of other certificates or course offerings.

RTS Atlanta is also home to the Alonzo and Althea Edmiston Center for the Study of the Bible & Ethnicity (ECSBE), which seeks to foster an appreciation for the histories and cultures of people groups that are outside of the dominant culture and, in doing so, to provide additional training for church leaders who especially want to minister in multi-ethnic, cross-cultural, and foreign missions contexts. To find out more about RTS Atlanta or the Edmiston Center, go to www.rts.edu/Atlanta or call us at 770-952-8884.