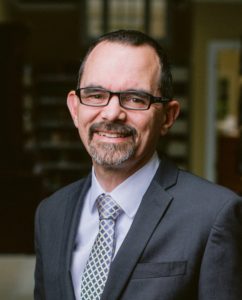 (ATLANTA, Ga.) — Reformed Theological Seminary is pleased to announce the promotion of Dr. Bruce A. Lowe to Dean of Students at RTS Atlanta, effective immediately.

Dr. Lowe has been serving on the faculty of RTS Atlanta for just over 12 years. He has a Ph.D. in New Testament from Macquarie University in Sydney, Australia. Before moving to the Atlanta area, he served as a pastor and church planter in Australia for many years.

During his time at RTS, Dr. Lowe has functioned as the campus pastor. He has been eager to pray with, to spend time with students, and to have them in his home. Dr. Lowe has written several articles and chapters in academic journals and books and is currently working on finishing the manuscript for his first book. He is active in leadership in his church — teaching Bible studies and sharing in the preaching responsibilities each month.

Dr. Guy M. Richard, Executive Director of RTS Atlanta, commented on Dr. Lowe’s promotion. “It is a joy to see Bruce officially recognized for the work he has been doing unofficially on our campus. Bruce has a real heart to pastor students and see them grow in their love for the Lord and their desire to spend themselves in ministry. He is a wonderful example of gracious, winsome pastoral leadership both in and out of the classroom. He has shepherded many students over the years. I look forward to many more coming under his influence in the years to come.”

After his promotion, Dr. Lowe shared, “The thing that strikes me about theological education is that it is not an end in itself but a means to an end. We are not bringing people in to make them ‘seminarians’ but shaping them so that they can go out and affect the world for Jesus. It is the greatest privilege to be appointed Dean of Students at RTS Atlanta because it means that I get to be on the front line of shaping students so they can be thinking rightly about seminary and also about life beyond it. I am excited to see what the Lord might do through me for the good of students at our campus.” Bruce and his wife, Rachel, have five children.

RTS Atlanta is a growing campus located on eight beautiful acres just outside of the Perimeter in south Marietta. We have been training pastors, campus ministers, missionaries, educators, and church leaders for more than 20 years. We have approximately 200 students who are studying for the Master of Divinity degree, the Master of Arts degree (both MAR and MABS), and a variety of other certificates and course offerings.

RTS Atlanta is also home to the Alonzo and Althea Edmiston Center for the Study of the Bible & Ethnicity (ECSBE), which seeks to foster an appreciation for the histories and cultures of people groups that are outside of the dominant culture and, in doing so, to provide additional training for church leaders who especially want to minister in multi-ethnic, cross-cultural, or foreign missions contexts. To find out more about RTS Atlanta or the Edmiston Center, go to www.rts.edu/Atlanta or call us at 770-952-8884.